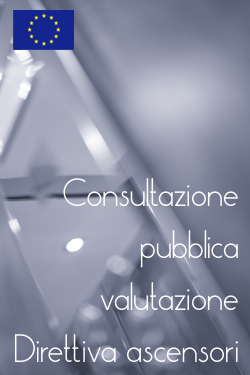 Public consultation for the Evaluation of the Lifts Directive

Directive 95/16/EC of 29 June 1995 on the approximation of the laws of the Member States relating to lifts aims at ensuring the free movement of lifts and safety components for lifts within the internal market and a high level of protection of the health and safety for users and maintenance personnel of lifts. It applies to:

It shall also apply to the safety components for use in such lifts listed in Annex IV.

New lifts, subject to the provisions of Directive 95/16/EC, include:

In 2014, the Directive was aligned to the New Legislative Framework, which clarified the obligations of economic operators and the operating rules of notified bodies and improved consistency with respect to conformity assessment. The new Lifts Directive 2014/33/EU was published on the OJEU on 29 March 2014 and is applicable since 20 April 2016.

This recast only aligned Directive 95/16/EC to the New Legislative Framework, thus not entailing its full revision.

This Public Consultation is launched in the framework of the Evaluation of Directive 95/16/EC.

[1] It is open to everyone and aims at gathering data on the evaluation criteria, in particular the relevance, effectiveness and added value of the Directive; on newly developed technologies and their impact on the lift industry and safety; on the current state of the art of the accessibility to lifts granted to people with disabilities (either permanent or temporary); on the clarity and exhaustiveness of the definitions and rules provided in the Directive.

Language: The questionnaire has been drafted in 6 EU languages.
Implementation: The minimum period for public consultations is 12 weeks.

Moreover, in line with the Regulatory Fitness and Performance programme of the European Commission (REFIT) and on behalf of DG GROW, an evaluation of the 1995 Lifts Directive is currently ongoing. To this purpose, four targeted surveys have also been developed, addressed specifically to:

These targeted surveys are more detailed and specific than the Public Consultation, thus requiring an in-depth knowledge of the Lifts Directive. These surveys aim at gathering data on the implementation of the Directive, on the market and accidents related to lifts, on market surveillance activities, on costs and benefits entailed by the Directive.

If you belong to one of the above categories and would like to take part in the relevant targeted survey, please write to the following address:Questo indirizzo email è protetto dagli spambots. E' necessario abilitare JavaScript per vederlo.

Please consider that you may contribute to these targeted surveys until 15th September 2016, while the Public Consultation will remain open until the end of November.

[1] The alignment to the NLF addressed the horizontal elements of New Approach, but did not include a revision of the sector specific aspects of Directive 95/16/EC. Article 46 of Directive 2014/33/EU requires the Commission to submit a report to the Council and the European Parliament regarding the implementation and functioning of the Directive before 19 April 2018.  Taking into consideration the scientific and technological progress, there is a need to evaluate its relevance in relation with the scope and the health and safety requirements of Directive 95/16/EC.