A normative document, developed according to consensus procedures, which has been approved by the ISO membership and P-members of the responsible committee in accordance with Part 1 of the ISO/IEC Directives as a draft International Standard and/or as a final draft International Standard and which has been published by the ISO Central Secretariat.

A text corresponding to an approved work item is developed as necessary through the preparatory and/or committee stages until consensus is reached in the committee. (In case of doubt, approval by 2/3 of the P-members voting may be considered to constitute consensus.)

The text is submitted to all ISO member bodies for a three-month vote as a draft International Standard (DIS) and is approved if two-thirds of the P-members vote affirmatively and not more than a quarter of all votes cast are negative.

A final text is prepared taking into account member body comments on the DIS and this text is issued for formal vote as a final draft International Standard (FDIS).

If the text is again approved by two-thirds of the P-members voting and if not more than a quarter of all votes cast are negative, then the text is approved and the Central Secretariat publishes the International Standard. 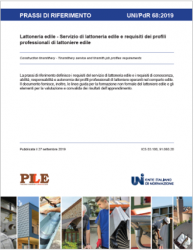 in Norme armonizzate Direttiva Macchine
Brexit Update: UK Designated Standards for Machinery ID 12775 | 07.02.2021 / List in pdf attachment Dated 1st January 2021, the Government has published a consolidated list of Standards for machinery. It supports the Supply of Machinery (Safety) Regulations 2008 (S.I 2008/1597). As will be seen… Leggi tutto