Multilateral Agreement M292  under section 1.5.1 of ADR concerning the carriage of damaged lithium batteries that are carried in accordance with the conditions approved by the competent authority under special provision 376

(1) By derogation from the provisions of chapter 3.3 of ADR, lithium ion cells or batteries  and lithium metal cells or batteries which have been identified as being damaged or  defective in accordance with special provision 376 such that they no longer conform to  the type tested in accordance with the applicable provisions of the Manual of Tests and  Criteria and which are liable to disassemble rapidly, react dangerously, produce flame or  the dangerous evolution of heat or the dangerous emission of toxic, corrosive or  flammable gases or vapours under· normal conditions of carriage shall not be carried  except under conditions approved by the competent authority of an ADR Contracting Party; this competent authority may also recognise an approval issued by the competent authority of a country which is not an ADR Contracting Party, provided this approval was  issued in accordance with the procedures applicable under ADR, the IMDG Code or the  ICAO Technical Instructions.

Bonn, 03 December 2015
The competent authority for ADR of the Federal Republic of Germany
For the Federal Ministry of Transport and Digital Infrastructure 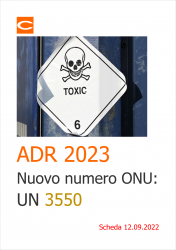