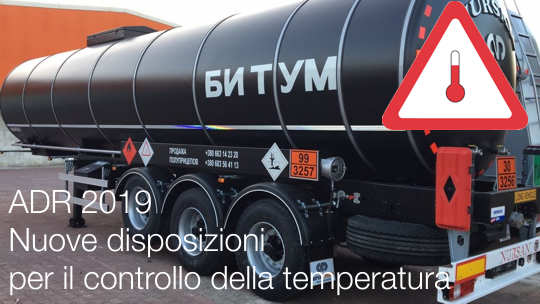 7.1.7.1 All self-reactive substances, organic peroxides and polymerizing substances shall be protected from direct sunlight and all sources of heat, and placed in adequately ventilated areas.

7.1.7.3.2 These provisions also apply to the carriage of substances for which:

(a) The proper shipping name as indicated in column 2 of Table A of Chapter 3.2 or according to 3.1.2.6 contains the word “STABILIZED”; and

(b) The SADT or SAPT determined for the substance (with or without chemical stabilization) as offered for carriage is:

(i) 50 °C or less for single packagings and IBCs; or
(ii) 45 °C or less for tanks. When chemical inhibition is not used to stabilize a reactive substance which may generate dangerous amounts of heat and gas, or vapour, under normal carriage conditions, this substance needs to be carried under temperature control. These provisions do not apply to substances which are stabilized by the addition of chemical inhibitors such that the SADT or the SAPT is greater than that prescribed in (b) (i) or (ii), above. 7.1.7.3.3 In addition, if a self-reactive substance or organic peroxide or a substance the proper shipping name of which contains the word “STABILIZED” and which is not normally required to be carried under temperature control is carried under conditions where the temperature may exceed 55 °C, it may require temperature control.

7.1.7.3.4 The “control temperature” is the maximum temperature at which the substance can be safely carried. It is assumed that during carriage the temperature of the immediate surroundings of the package does not exceed 55 °C and attains this value for a relatively short time only during each period of 24 hours. In the event of loss of temperature control, it may be necessary to implement emergency procedures.

The “emergency temperature” is the temperature at which such procedures shall be implemented.

7.1.7.3.5 Derivation of control and emergency temperatures

a - i.e. the SADT/SAPT of the substance as packed for carriage

7.1.7.3.6 The control and emergency temperatures are derived using the table in 7.1.7.3.5 from the SADT or from the SAPT which are defined as the lowest temperatures at which self-accelerating decomposition or self-accelerating polymerization may occur with a substance in the packaging, IBC or tank as used in carriage. An SADT or SAPT shall be determined in order to decide if a substance shall be subjected to temperature control during carriage. Provisions for the determination of the SADT and SAPT are given in Part II, section 28 of the Manual of Tests and Criteria.

7.1.7.3.8 The actual carriage temperature may be lower than the control temperature but shall be selected so as to avoid dangerous separation of phases.

7.1.7.4.1 Maintenance of the prescribed temperature is an essential feature of the safe carriage of substances stabilized by temperature control. In general, there shall be:

(a) Thorough inspection of the cargo transport unit prior to loading;

(b) Instructions to the carrier about the operation of the refrigeration system including a list of the suppliers of coolant available en route;

(c) Procedures to be followed in the event of loss of control;

(e) Provision of a back-up refrigeration system or spare parts.

7.1.7.4.2 Any control and temperature sensing devices in the refrigeration system shall be readily accessible and all electrical connections weather-proof. The temperature of air space within the cargo transport unit shall be measured by two independent sensors and the output shall be recorded so that temperature changes are readily detectable. The temperature shall be checked every four to six hours and logged. When substances having a control temperature of less than +25 °C are carried, the cargo transport unit shall be equipped with visible and audible alarms, powered independently of the refrigeration system, set to operate at or below the control temperature.

7.1.7.4.4 The suitability of a particular means of temperature control for carriage depends on a number of factors. Factors to be considered include:

(a) The control temperature(s) of the substance(s) to be carried;

(b) The difference between the control temperature and the anticipated ambient temperature conditions;

(c) The effectiveness of the thermal insulation;

(d) The duration of carriage; and

(e) Allowance of a safety margin for delays.

7.1.7.4.5 Suitable methods for preventing the control temperature being exceeded are, in order of increasing control capability:

(a) Thermal insulation provided that the initial temperature of the substance(s) to be carried is sufficiently below the control temperature;

(b) Thermal insulation with coolant system provided that:

(i) An adequate quantity of non-flammable coolant (e.g. liquid nitrogen or solid carbon dioxide), allowing a reasonable margin for delay, is carried or a means of replenishment is assured;
(ii) Liquid oxygen or air is not used as coolant;
(iii) There is a uniform cooling effect even when most of the coolant has been consumed; and
(iv) The need to ventilate the transport unit before entering is clearly indicated by a warning on the door(s) of the transport unit;

(c) Thermal insulation and single mechanical refrigeration provided that for substance(s) to be carried with a flash point lower than the sum of the emergency temperature plus 5 °C explosion-proof electrical fittings, EEx IIB T3 are used within the cooling compartment to prevent ignition of flammable vapours from the substances;

(i) The two systems are independent of one another;
(ii) The provisions in (b) and (c) are complied with;

(i) Apart from the integral power supply unit, the two systems are independent of one another;
(ii) Each system alone is capable of maintaining adequate temperature control; and
(iii) For substance(s) to be carried with a flash point lower than the sum of the emergency temperature plus 5 °C explosion-proof electrical fittings, EEx IIB T3, are used within the cooling compartment to prevent ignition of flammable vapours from the substances.

7.1.7.4.6 The methods described in 7.1.7.4.5 (d) and (e) may be used for all organic peroxides and self-reactive substances and polymerizing substances.

The method described in 7.1.7.4.5 (b) may be used for organic peroxides and selfreactive substances of Types C, D, E and F and polymerizing substances when the maximum ambient temperature to be expected during carriage does not exceed the control temperature by more than 30 °C.

The method described in 7.1.7.4.5 (a) may be used for organic peroxides and selfreactive substances of Types C, D, E and F and polymerizing substances when the maximum ambient temperature to be expected during carriage is at least 10 °C below the control temperature.