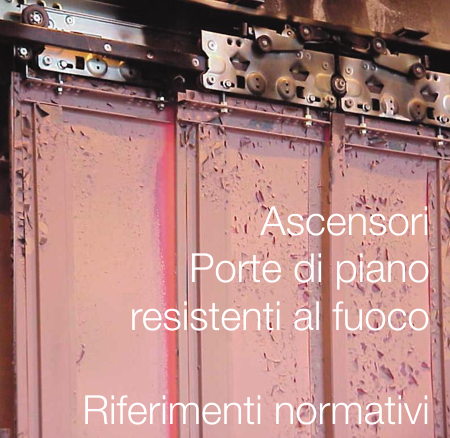 Lift landing doors are part of lift installations subject to the provisions of Directive 95/16/EC of 29 June 1995 on the approximation of the laws of the Member States relating to lifts.

The conformity evaluation procedures to be applied for this aspect of lift safety are determined by the Lifts Directive 95/16/EC.

The necessary information concerning the fire resistance of the lift landing doors should also be provided by the installer of the lift to the person responsible for work on the building or construction, according to the provision of Article 2.2 of the Directive. Lifts with fire resistant landing doors certified as complying with the requirements of Directive 95/16/EC according to one of the conformity evaluation procedures laid down in that Directive can be placed on the market, installed and put in service freely in the EEA without the need for any further national approval.

The relevant documents, depending on the conformity assessment procedure applied, are:

2. Standards for the testing of fire resistance of lift landing doors The Lifts Directive came fully into force in July 1999.

This standard, mandated by the European Commission under the Construction Products Directive, was developed by CEN TC 127.

In 2003, a specific harmonised standard for the testing of fire resistant lift landing doors was adopted. Standard EN 81-58:2003 Safety rules for the construction and installation of lifts - Examination and tests - Part 58: Landing doors fire resistance test was developed by CEN TC 10 under a mandate given by the European Commission under the Lifts Directive.