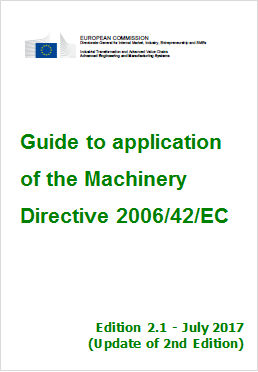 Guide to application of the Machinery Directive 2006/42/EC

While the revised Machinery Directive was being discussed by the Council and the European Parliament, the Commission agreed to prepare a new Guide to its application. The purpose of the Guide is to provide explanations of the concepts and requirements of Directive 2006/42/EC in order to ensure uniform interpretation and application throughout the EU. The Guide also provides information about other related EU legislation. It is addressed to all of the parties involved in applying the Machinery Directive, including machinery manufacturers, importers and distributors, Notified Bodies, standardisers, occupational health and safety and consumer protection agencies and officials of the relevant national administrations and market surveillance authorities. It may also be of interest to lawyers and to students of EU law in the fields of the internal market, occupational health and safety and consumer protection.
It should be stressed that only the Machinery Directive and the texts implementing its provisions into national law are legally binding.

The Guide is published on the Commission’s Website EUROPA in English. This updated Edition 2.1 is intended to be a living document, edited and updated with new guidance once approved by the Machinery Working Group. It will be made available in other EU languages, but only the English version will be checked by the Commission. Therefore, in case of doubt, the English version should be taken as the reference.
The Guide can be downloaded and is presented in a printable format. The text of the Directive is presented in boxed red italic type - the comments follow in black type. 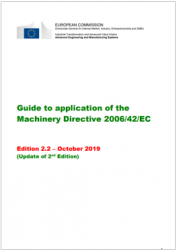