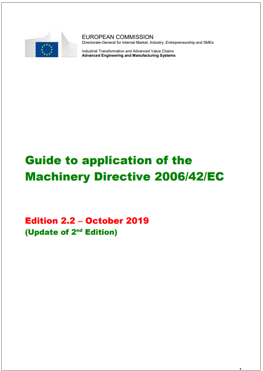 Introduction to the Update of the 2nd Edition

While the revised Machinery Directive was being discussed by the Council and the European Parliament, the Commission agreed to prepare a new Guide to its application.

The purpose of the Guide is to provide explanations of the concepts and requirements of Directive 2006/42/EC in order to ensure uniform interpretation and application throughout the EU. The Guide also provides information about other related EU legislation. It is addressed to all of the parties involved in applying the Machinery Directive, including machinery manufacturers, importers and distributors, Notified Bodies, standardisers, occupational health and safety and consumer protection agencies and officials of the relevant national administrations and market surveillance authorities. It may also be of interest to lawyers and to students of EU law in the fields of the internal market, occupational health and safety and consumer protection.

It should be stressed that only the Machinery Directive and the texts implementing its provisions into national law are legally binding.

The 2nd Edition of the Guide was endorsed by the Machinery Committee on 2 June 2010. In comparison with the 1st Edition, it was completed with comments on Annexes III to XI of the Machinery Directive. Some errors noticed by readers have been corrected. Legal references and terms have been updated in line with the Lisbon Treaty - in particular, where the Directive refers to 'the Community', the Guide now refers to 'the EU'.

Following discussion with the industry, the comments relating to chains, ropes and webbing for lifting purposes in §44, §330, § 340, §341, and §357 have been revised in order to clarify the practical application of the requirements relating to these products.

The 2nd Edition also includes a thematic index to facilitate consultation of the Guide. The numbering of the sections of the Guide is unchanged.

The 1st Update to the 2nd Edition of the Guide, further named Edition 2.1, has been completed to include the amendments made to the Machinery Directive by the Directive 2009/127/EC on Pesticide Equipment and the Regulation (EU) No 167/2013 on the approval and market surveillance of agricultural and forestry vehicles (Tractors). In addition, guidance on “partly completed machinery” and “assemblies” has been added, as well as inserting clarifications and corrections to the concepts of "safety components'', "new and used machinery", "marking of machinery". A number of key guidance decisions of the Machinery Working Group have been incorporated into this text.

This Update to the 2nd Edition of the Guide, further named Edition 2.2, contains a number of clarifications and corrections to the concepts of “safety components” and “partly completed machinery”, and some edits to ensure coherence with the LVD Guide. There are two newly added paragraphs about the machinery control units (§417) and safety components which are considered to be logic units (§418).

The Guide is published on the Commission’s Website EUROPA in English. This updated Edition 2.2 is intended to be a living document, edited and updated with new guidance once approved by the Machinery Working Group. It might be made available in other EU languages, but only the English version will be checked by the Commission.

Therefore, in case of doubt, the English version should be taken as the reference.

Of course, the Commission takes full responsibility for the content of the Guide. Readers are invited to communicate any corrections or comments so that they can be taken into account in preparing future updates or a revised 3rd Edition.