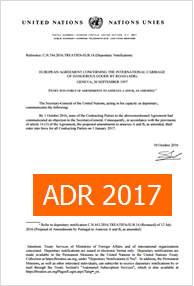 1. Independently of the revision procedure provided for in article 13, any Contracting Party may propose one or more amendments to the Annexes to this Agreement. To that end it shall transmit the text thereof to the Secretary-General of the United Nations. The Secretary-General may also propose amendments to the Annexes to this Agreement for the purpose of ensuring concordance between those Annexes and other international agreements concerning the carriage of dangerous goods.

2. The Secretary-General shall transmit any proposal made under paragraph 1 of this article to all Contracting Parties and inform thereof the other countries referred to in article 6, paragraph 1.

3. Any proposed amendment to the Annexes shall be deemed to be accepted unless, within three months from the date on which the Secretary-General circulates it, at least one-third of the Contracting Parties, or five of them if one-third exceeds that figure, have given the Secretary-General written notification of their objection to the proposed amendment. If the amendment is deemed to be accepted, it shall enter into force for all the Contracting Parties, on the expiry of a further period of three months, except in the following cases:

(a) In cases where similar amendments have been or are likely to be made to the other international agreements referred to in paragraph 1 of this article, the amendment sha ll enter into force on the expiry of a period the duration of which shall be determined by the Secretary-General in such a way as to allow, wherever possible, the simultaneous entry into force of the amendment and those that have been made or are likely to be made to such other agreements; such period shall not, however, be of less than one month's duration;

(b) The Contracting Party submitting the proposed amendment may specify in its proposal, for the purpose of entry into force of the amendment, should it be accepted, a period of more than three months' duration.

(a) intergovernmental organizations which are concerned with transport matters;

(b) international non-governmental organizations whose activities are directly related to the transport of dangerous goods in the territories of the Contracting Parties.

in Norme armonizzate DPI Dispositivi Protezione Individuale
Regulation (EU) 2016/425 on personal protective equipment: Harmonised standards published in the OJ | Update 22 July 2021 ID 14192 | 02.08.2021 Summary of references of harmonised standards published in the Official Journal - Regulation (EU) 2016/425 of the European Parliament and of the Council of… Leggi tutto