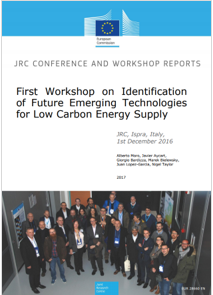 As part of the European Commission's internal Low Carbon Energy Observatory project, the Joint Research Centre is developing an inventory of future emerging technologies relevant to energy supply. A key part of this initiative is consultation with external experts.

This workshop is the first step in this process.

The Joint Research Centre is developing an inventory of future emerging technologies relevant to energy supply, as part of the Commission's internal Low Carbon Energy Observatory project, a key element is consultation with external experts, addressing both those with in-depth experience in specific fields and those with a broad perspective on relevant science and engineering aspects.

The LCEO Workshop held 1 December 2016 was the first step in this process, bringing together a group of 20 experts from European and international universities and research organisations, as well as several JRC experts. The programme targeted photovoltaics, thermo-electric concepts, fuel cells and biofuels. The participants, organized in two working groups: “Fuels” and “Photovoltaics”; identified a set of FETs and discussed about different aspects of these technologies: potential, challenges, applications and assessed their technology readiness level (TRL). This document summarises the outcome of the discussions in order to facilitate its use by the European Commission policy makers and the scientific community in general.

The first working group had a broad scope, considering several technologies not directly related to each other but falling under the general denomination “fuels”. Metal fuel technology addresses the potential of many metallic materials to either be burned in powder form in a combustion engine, or used in the production of
electrochemical or fuel cells batteries.

Microbial fuel cell technology can be used for electricity generation and wastewater treatment. Time was also devoted to sub-technologies such as the microbial electrolysis cell, used in the production of hydrogen, and sediment microbial fuel cells, an early stage technology whose cost-effectiveness and the stability of its devices were highlighted by the experts. Direct carbon fuel cells, a technology allowing the quick conversion of raw biomass with direct production of electrical energy, were also assessed.

The experts also discussed the advances in algal biofuels, taking in the latest progress all along the production chain, from the cultivation to the production of the biofuel, as well as some new cross-cutting applications, such as the coupling of the harvesting devices with photovoltaic modules.

Plasma activation of stable molecules or plasma assisted catalysis, a technology based in the capacity of plasma to transfer or store electric energy into gaseous molecules, was also considered.

The second working group, on photovoltaics, focussed its attention in a larger set of technologies producing electricity from (solar) radiation, and some auxiliary or subsidiary technologies representing advancements in the production methods of photovoltaic devices. Hence, even if the number of technologies discussed in this working group was larger, these technologies were more similar among them so it was possible to group them in categories.

In the photovoltaic working group, the concepts discussed can be divided in three broad categories.

The first is characterised by a clear potential to impact the market, recent progress and the capacity to reach high efficiency levels. It includes innovative thin film multi-junction solar cells, innovative III-V compound based solar cells, kesterite and perovskite solar cells. All could especially benefit from the development of novel contacts improving the efficiency of the PV devices. All also still have many challenges, for example materials research needed on certain aspects and on processability of devices.

The second PV category covers technologies that still need significant development to demonstrate that their theoretical potential could be realised in practice. Examples include intermediate band solar cells and ferroelectrics, multiple exciton generation solar cells, hot carrier solar cells or the application of plasmonics to photovoltaics; the panel recognize the scientific interest in these technologies but expressed doubts about their future development and about their possibilities to reach a commercial level.

A third PV group covers the multidisciplinary technologies, not strictly photovoltaics, such as photoelectrocatalytic or thermophotovoltaic devices (both at an early stage of development and with a moderate impact and chances of success). In this group we can also find technologies which are considered as new methodological approaches or as general manufacturing methods. For example the production of solar cells from semiconductor foils, the development of new photovoltaic materials via combinatorial and computational design and the development of low cost manufacturing techniques. For instance for the later, roll-to-roll manufacturing with flexible substrates is considered more for an industrial research needing adaptation and scale-up of processes than a fundamental process to be studied at a scientific level.

Outside of these two working groups, new thermoelectric materials where presented. These technologies are being investigated for building low-cost heat-recovery devices, which could be used to provide electrical energy in various situations.

Finally, as a general comment, the panels considered it very important to devote more efforts on basic research, since for several technologies a TRL advancement is possible only if a deeper comprehension of the basic physical mechanisms is achieved. Indeed the group highlighted the importance of material science and device oriented research to the development of the new FET technologies.