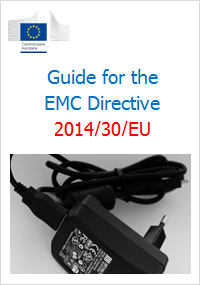 They assist in the interpretation of the Directive but do not substitute for it; they explain and clarify some of the most important aspects related to its application. The Guide is also intended to ensure the free movement of products in the EU Single Market by agreement of these explanations and clarifications, reached by consensus amongst Member States and other stakeholders.

These Guidelines are publicly available, but they are not binding in the sense of legal acts adopted by the Union. The legally binding provisions are those transposing the
EMCD at the national level. Finally, the reader’s attention is drawn to the fact that all references to the CE marking and EU Declaration of Conformity relate only to the EMCD and that the freedom to place an apparatus on the market in the EU Internal Market is only guaranteed when applying all relevant legislation.

This EMC Guide should always be read in conjunction with the 'Blue Guide' on the implementation of EU product rules.

The purpose of this EMC Guide is to give guidance on certain matters and procedures of the Directive 2014/30/EU2 on the harmonisation of the laws of the Member States relating to electromagnetic compatibility (EMCD).

References in this EMC Guide to the Union or the single market are, accordingly, to be understood as referring to the EEA, or to the EEA market. The EMC sector is falling under the Mutual Recognition Agreement on Conformity Assessment between the EU and Switzerland, therefore, they are to be understood also to apply to Switzerland.

The Electromagnetic Compatibility (EMC) Directive 2014/30/EU (EMCD) repeals the previous EMCD 2004/108/EC and maintains the same objectives - to guarantee the free movement of equipment and to create an acceptable electromagnetic environment in the Union territory.