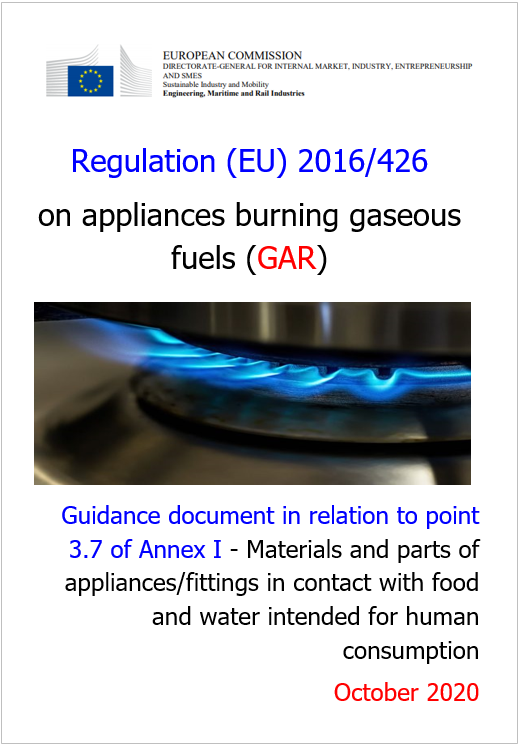 Regulation (EU) 2016/426 on appliances burning gaseous fuels (GAR) - Guidance document in relation to point 3.7 of Annex I - Materials and parts of appliances/fittings in contact with food and water intended for human consumption

N.B. State of play of the revision of the Drinking water Directive by 30 September 2020 On 1 February 2018, the Commission adopted a proposal for a revision of the Drinking water Directive.
The European Parliament proposed amendments to the Commission proposal at its plenary on 23 October 2018.
On 5 March 2019, the Council adopted its position on the proposal to revise the Drinking water Directive.
The Parliament and the Council reached a provisional agreement in the trilogues on 18 December 2019. Members States' ambassadors (Coreper) confirmed the agreement on 5 February and the ENVI Committee gave its endorsement on 18 February 2020.
The confirmation of the political agreement was submitted to the Environment Council meeting on 5 March 2020. After legal-linguistic revision, the Council is expected to formally adopt the text as its first reading position, after which the file will return to Parliament for final adoption in second reading.

Point 3.7. of Annex I to the GAR refers specifically to the definition of “water intended for human consumption” provided by Article 2 of the Drinking water Directive according to which “all water either in its original state or after treatment, intended for drinking, cooking, food preparation or other domestic purposes, regardless of its origin and whether it is supplied from a distribution network, from a tanker, or in bottles or containers”.

The GAR itself does not contain any additional elements of definition of the concept of “water intended for human consumption” and simply refers to the definition provided by the Drinking water Directive.

ECDC guidance for adjusting non-pharmaceutical interventions based on vaccination status

Proposal for a Regulation on a European approach for Artificial Intelligence

Proposal for a Regulation on machinery products

in Norme armonizzate REACH
Norme armonizzate REACH Aprile 2021 Titles and references of standards to be used as the test methods for demonstrating the conformity of articles under entry 27 of Annex XVII to Regulation (EC) n° 1907/2006 of the European Parliament and of the Council concerning the Registration, Evaluation,… Leggi tutto