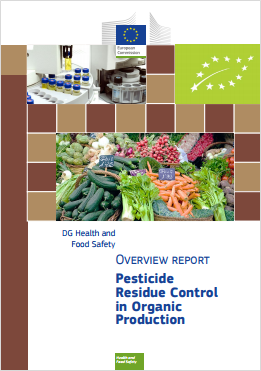 This overview report describes the results of a project of the European Commission's Directorate-General for Health and Food Safety to evaluate the official controls for pesticide residues in organic production. The project consisted of a questionnaire sent to all Member States, followed by a series of five audits carried out in 2015 and 2016.

The report concludes that there is comprehensive risk based sampling along the food chain, with numbers significantly exceeding the level of sampling required by EU legislation. This provides a sound basis to control pesticide residues in organic
production and to identify and investigate any issues detected. Good communication between competent authorities within the Member States improves the understanding of pesticide related questions and contributes to the effectiveness of controls. Nevertheless, the official instructions on the implementation of pesticide residue controls specific to organic production were often not sufficiently detailed and clear.

The report highlights the lack of official sampling procedures in the production stages at Member State level, and the absence of defined criteria for the scope and sensitivity of laboratory analyses to be carried out. The absence of clear official criteria for the interpretation and follow-up of pesticide residue detections impedes consistent treatment regarding compliance with organic production rules. These shortcomings impact negatively on the effectiveness of controls. The inconsistency of compliance criteria impacts on enforcement, the EU single market and the import of organic products from non-EU Countries. The evaluation of replies to the questionnaires received from EU competent authorities and laboratories is annexed to the report.