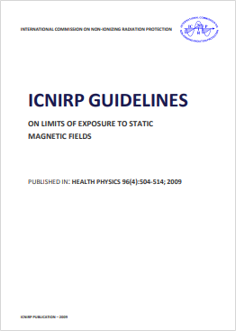 Guidelines on Limits of Exposure to Static Magnetic Fields

THE RAPID development of technologies in industry and medicine using static magnetic fields has resulted in an increase in human exposure to these fields and has led to a number of scientific studies of their possible health effects. The World Health Organization (WHO) recently developed a health criteria document on static electric and magnetic fields within the Environmental Health Criteria Program (WHO 2006).

The document contains a review of biological effects reported from exposure to static fields and, together with other recent publications [mainly International Commission on Non-Ionizing Radiation Protection (ICNIRP) 2003, McKinlay et al. 2004, and Noble et al. 2005], serves as the scientific database for the development of the rationale for the guidelines described in the current document, which supersede those published by ICNIRP in 1994 (ICNIRP 1994).