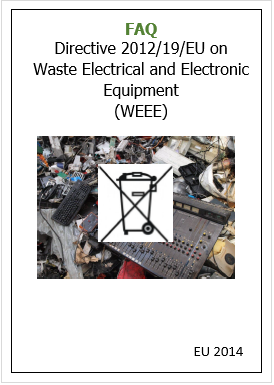 The purpose of this Frequently Asked Questions (FAQ) document is to clarify certain aspects of Directive 2012/19/EU (hereafter referred to as the “ Directive”), which entered into force on 13 August 2012 and which Member States were required to transpose into national law by 14 February 2014. At that time, Directive 2002/96/EC (the “old WEEE Directive”) was repealed.

When formulating the answers to the questions raised in this FAQ document the two following criteria have been applied:
- they should not deviate from the answers given in the FAQ document of August 2006 on the old WEEE Directive , unless the underlying legal text has changed, answers can now be given in a more precise manner , or, in a few cases, a different interpretation has proved necessary;
- they should not deviate from the answers to identical ‘frequently asked questions’ contained in the RoHS 2 FAQ document, unless differences in the objectives and nature of the two Directives require a different answer ;

This FAQ document is considered to be a ‘living document’ and the Commission may update it as necessary in light of the experience with the implementation of the new Directive and any future requirements. This document supersedes the FAQ document on the old WEEE Directive and the latter document has been repealed.

Finally, as is customary, this FAQ document reflects the views of DG Environment and as such is not legally binding. The definitive interpretation of Union law is the sole prerogative of the Court of Justice of the European Union.