Initiated due to the public outcry against the detrimental impacts of Acid Rain in Europe, the Convention on Long-range Transboundary Air Pollution (CLRTAP) was signed in 1979 and entered into force in 1983. As the first regional environmental convention, CLRTAP has been instrumental in the reduction of key harmful pollutants in both Europe and North America.

With 51 parties out of UNECE’s 56 member States, the Convention covers most of the region. Over the past 30 years, the Convention has been extended by 8 Protocols, focused upon setting strict reduction targets for releases of pollution for the protection of human and environmental health. Each of these Protocols targets pollutants such as sulphur, nitrogen oxide, persistent organic pollutants, volatile organic compounds, ammonia, and toxic heavy metals.

Over the years, the Convention has contributed to drastically reducing the level of pollutants in the region:

As the Convention moves forward, it has incorporated the new findings and concerns into an integrated approach with multiple targets aimed at addressing multiple effects. The 1999 Gothenburg Protocol to Abate Acidification, Eutrophication and Ground-level Ozone went into force in 2003, and focuses upon reducing harmful impacts via establishing stricter targets for SO2, NOx, VOCs and ammonia. The Protocol will soon be revised to include more pollutants. The ongoing renegotiations of the Heavy Metals Protocol and Persistent Organic Pollutants Protocol will also present both stricter targets and emphasize new pollutants (including dissolved solvents, dust and particulate matter).

European Union
The European Community’s member countries were some of the first to sign and ratify the Convention. Over the past 30 years, some of the greatest declines in harmful air pollutants have been witnessed here. The European Commission’s Directorate–General for the Environment (DG Environment) has a specific strategy for cooperation with CLRTAP, focusing on 3 key areas: the development and use of air pollutant models, establishing reliable emissions inventories and defining a common approach on air pollution effects. The work conducted by the European Union, for compliance with CLRTAP, was recently presented in a report issued by the European Environmental Agency, summarizing air pollution emissions data in each country from 1990 to 2007. The EU’s commitment to conducting relevant research provides a significant contribution to the understanding of the current state of air pollution and its detrimental impacts.

North America
The transboundary effects of air pollution triggered both Canada and the United States to ratify the Convention during its earlier years. Both nations recognized that lowering emissions in North America as well as Europe would be crucial for the reduction of air pollution and its impacts. Canada and the United States implement the provisions of the Convention through bilateral agreements: cooperating on long-range transport of air pollutants under the 1991 Canada–U.S. Air Quality Agreement, the Great Lakes Binational Toxics Strategy, and (with Mexico) under the Commission for Environmental Cooperation and the Border Air Quality Strategy. Among the achievements this cooperation has produced are the Acid Rain and Ozone Annexes to the Canada–U.S. Air Quality Agreement, with a commitment to reduce emissions of sulphur dioxide, NOx and VOCs.

Eastern Europe, Caucasus and Central Asia
CLRTAP is increasingly focusing upon providing expertise and guidance to Eastern European, Caucasus and Central Asian nations in their initiatives to comply with the Protocols and reduce impacts from air pollution. This year, the Persistent Organic Pollutants (POPs) Protocol, Heavy Metals Protocol and Gothenburg Protocol will be renegotiated to include stringent targets coupled with provisions for flexibility to provide these nations the opportunity to replace their older technology and better monitor pollutants. In addition, the Convention continues to assist these nations with guidance in developing policies and efficiently implementing the Protocols; actions which will prove to be effective in reducing emissions and protecting their populations’ health and environment. This year alone, CLTRTAP’s Secretariat has undertaken projects to assist the Russian Federation, Kazakhstan, Belarus, Moldova, Albania, Bosnia Herzegovina, Montenegro, Serbia and the Former Yugoslav Republic of Macedonia.

Emerging issues
Although much has been accomplished in the past 30 years, scientific research continues to identify new risks and emissions targets. In response, CLRTAP is increasing its focus on the addition of new pollutants including dissolved solvents, dust, and fine particulate matter (PM 2.5) amongst others. Climate change is a major environmental challenge, and both greenhouse gases and air pollutants have largely the same source and their effects can be closely linked. It is a challenge for the future of CLRTAP to make progress in maximizing the benefits to be gained from policies to address both climate change and damage from air pollution. Thus, the Convention recognizes the importance of working in an integrated manner with respect to climate change, and has started a dialogue with other international agreements such as the United Nations Environment Programme (UNEP)’s Stockholm Convention (addressing persistent organic pollutants) and the future mercury convention, to further explore these links and possible solutions.

The Convention has 51 countries signed as ratified members. (download status of ratification). Encompassing the European continent and North America, CLRTAP continues to tackle air pollution with one of the most effective scientific monitoring networks and a series of task forces committing to addressing the numerous impacts. In a history of cooperation spanning 3 decades, the Convention continues to negotiate new emissions targets and sets the standard in the global effort to clean the air we breathe.

The European Monitoring and Evaluation Programme (EMEP) and the International Cooperative Programmes (ICPs), are networks of scientists and research centers which utilize the best available technologies to map, model and research the levels and impacts of air pollutants.

Acid rain is a falling rain (or snow) which has become acidic (pH less than 5.6) as a result of its combination with gaseous pollutants, such as sulphur dioxide (SO2) and nitrogen oxides (NOx). Acid rain may cause acidification of surface waters, soils and ecosystems.

Acidification of the environment is caused by inputs of acidifying substances with rain and snow or direct deposition of gases or particles on vegetation (dry deposition).

Black carbon is formed through incomplete combustion of fossil fuels, biofuel and biomass; emitted as both anthropogenic and naturally occurring soot. It warms the planet by absorbing heat in the atmosphere and by reducing albedo of e.g. snow. It also forms part of PM (see below).

Eutrophication is an increase in the concentration of chemical nutrients in an ecosystem to an extent that increases the primary productivity of the ecosystem. Depending on the degree of eutrophication, subsequent negative environmental effects such as anoxia and severe reductions in water quality, fish, and other animal populations may occur.

Ground-level ozone is a toxic pollutant which forms when pollutants from vehicles, power plants, refineries and other sources undergo a chemical reaction in the presence of sunlight. It contrasts with stratospheric ozone, naturally-occurring ozone which protects the Earth from ultraviolet radiation. Ground-level ozone can cause people to experience congestion, throat irritation, and coughing and wheezing and can damamge plants (including cash crops).

Heavy metals are metallic elements with high atomic weights, e.g. mercury, chromium, cadmium, arsenic, and lead. They can damage living things at low concentrations and tend to accumulate in the food chain.

Nitrogen oxides (NOx) are chemical compounds of nitrogen and oxygen that are created when the gases are exposed to high temperatures, for instance by combustion. NOx have an acidifying effect on soil and water, contribute to over fertilisation, damage materials and also contribute to the formation of ground-level ozone.

Particulate matter (PM) or fine particles are tiny particles of solid or liquid suspended in a gas or liquid. In contrast, aerosol refers to particles and the gas together. Sources of particulate matter can be man made or natural. PM is thought to be the most damaging widespread pollutant for human health.

Persistent organic pollutants (POPs) are chemical substances that persist in the environment, bioaccumulate through the food web, and pose a risk of causing adverse effects to human health and the environment. This group of priority pollutants consists of pesticides (such as DDT), industrial chemicals (such as polychlorinated biphenyls, PCBs) and unintentional by-products of industrial processes (such as dioxins and furans).

Sulphur dioxide (SO2) is a gas created by combustion of sulphurous matter, particularly oil and coal, and which also arises in a number of industrial processes.

Figure 1. Emissions (Tg/year) of sulphur dioxide, nitrogen oxides and ammonia 1990-2006 in the United States and Europe

Source: Data from USEPA and EEA 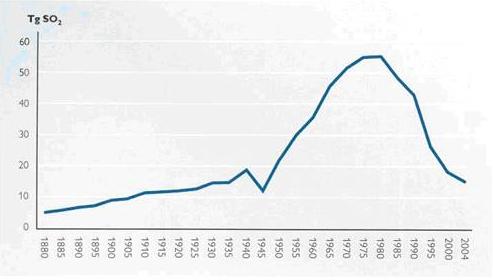 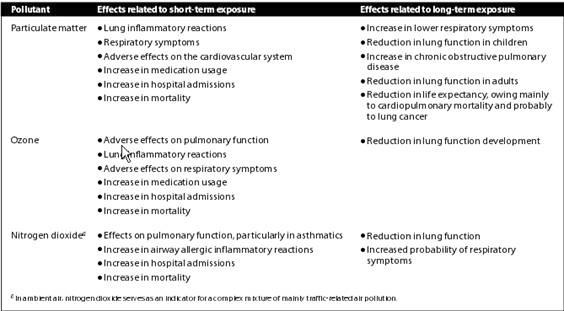 Source:  "The aspects of air pollution" made by the World Health Organization (WHO)

Figure 4.   Daily reported and modeled mortality in Europe, 2003 in relation to heat and ozone exposure 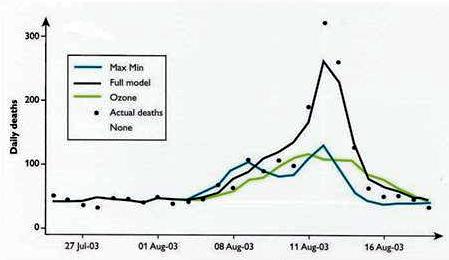 Source: Swedish Environmental Protection Agency
The combination of heat and ozone exposures was studied in conjunction with the extreme heat in Europe in 2003. With the use of a multiple regression model it was shown that ozone and heat both impacted on daily mortality in French cities. The extent of effect varied between cities, but it appeared that the ozone contribution accounted for approximately half the total additional mortality in Paris.