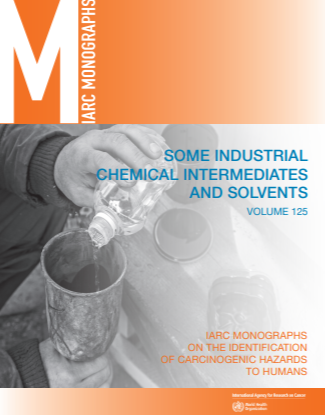 IARC Monographs on the Identification of Carcinogenic Hazards to Humans Volume 125: Some Industrial Chemical Intermediates and Solvents.

1-Butyl glycidyl ether is a reactive intermediate and viscosity-reducing solvent used in the manufacture of epoxy resins, and is also used as a surface modifier in the dyeing of cotton and wool.

1-Bromo-3-chloropropane is an intermediate in the manufacture of a wide range of pharmaceuticals, some pesticides, and other chemicals.

4-Chlorobenzotrifluoride is widely used as a solvent and diluent for inks, paints, toners, and coatings and in dispersive applications in the automotive industry. It is also a major component in industrial and consumer formulations such as cleaners, degreasers, stain removers, and sealants.

Allyl chloride is almost exclusively used in the production of epichlorohydrin, a basic building block for epoxy resins and the synthesis of glycerol, although it is also an intermediate in the synthesis of various pesticides, pharmaceuticals, adhesives, and personal-care products.

Exposure to all these agents may occur in various occupational settings as well as in the general population.

An IARC Monographs Working Group reviewed epidemiological evidence, animal bioassays, and mechanistic evidence to reach conclusions as to the carcinogenic hazard to humans of exposure to these agents.
...
segue in allegato