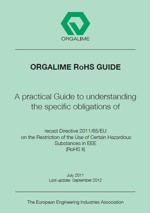 Directive 2002/95/EC on the Restriction of Use of Certain Hazardous Substances in Electrical and Electronic Equipment (known as the “RoHS Directive” or “RoHS I”) restricts the use of lead, cadmium, mercury, hexavalent chromium, polybrominated biphenyls and polybrominated diphenylethers in certain electrical and electronic equipment since 1 July 2006.

The result of this recast is Directive 2011/65/EU (hereafter referred to as the “recast RoHS Directive” or “RoHS II”), which was finally adopted on 27 May 2011.

The initial RoHS Directive 2002/95/EC and its successive amendments1 will be repealed with effect from 3 January 2013. Notwithstanding other EU legislation and Regulation (EC) 1907/2006 (REACH) in particular, as of its entry into force, the recast RoHS Directive is a critical reference for hazardous substance restrictions in electrical and electronic equipment.

The purpose of this ORGALIME Guide is to explain the main changes and obligations arising from the recast, and to identify their consequences for ORGALIME industries. Its update of September 2012 provides to readers the common understanding of the Directive of the affected European manufacturers of electrical and electronic equipment in the context of the Commission’s consultation on the draft RoHS2-FAQ Guidance

Document of 15 June 2012 and its announced possible revision before 3 January 2013.2
These conclusions reflect the best knowledge of industry experts across Europe and the state of the art at the moment of its publication. This Guide will be regularly updated to accommodate latest developments. To ensure that your copy is up to date, please register on Orgalime’s website http://publications.orgalime.org.

The principles contained in this Guide are however not legally binding, and following it gives no guarantees.

Producers must ultimately exercise their own judgement. A binding interpretation of Community legislation is the exclusive competence of the European Court of Justice. ORGALIME also recommends to producers, when using this Guide, to always refer to the national legislation, and guidance if any, of the Member State they are dealing with.

This ORGALIME Guide is to be considered as complementary to other ORGALIME Guides on the WEEE and RoHS Directives.3 Until repeal of the initial RoHS Directive 2002/95/EC, with effect from 3 January 2013 these other Orgalime Guides remain valid and should be consulted in parallel.
In addition, ORGALIME has also published a Guide on the REACH Regulation4, which provides further complementary information to this Guide.
ORGALIME, the European Engineering Industries Association, speaks for 37 trade federations representing some 130,000 companies in the mechanical, electrical, electronic, metalworking & metal articles industries of 22 European countries. The industry employs some 10.2 million people in the EU and in 2011 accounted for some €1, 666 billion of annual output. The industry not only represents some 28% of the output of manufactured products but also a third of the manufactured exports of the European Union. This guide has been drafted in collaboration with the European Sector Associations which are listed hereafter in Annex E.