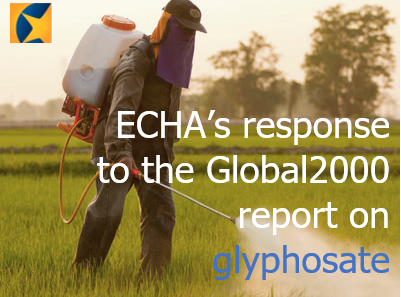 ECHA’s response to the Global2000 report on glyphosate

As noted previously, ECHA encourages and welcomes scientific debate and challenge – it is fundamental to our work. We therefore welcome the scientific content of the report and the challenges it poses on some of the issues raised.
However, we again most strongly refute the allegation made in the title of the Global2000 report and repeated in your response of 17 July. We have not breached the relevant regulations nor colluded with industry in arriving at the scientific opinion which is now considered by the policy makers in deciding whether to renew the approval of glyphosate as a herbicide.

ECHA notes your appreciation for the transparency and openness in welcoming observers from NGOs at the meetings of the scientific committees of ECHA and agrees that it is an important step to promote public trust.

During the plenary meeting in March 2017, ECHA’s risk assessment committee (RAC) delivered its scientific opinion which was different to what your organisation would have liked. RAC’s independent scientific experts assessed glyphosate’s hazardous properties, including carcinogenicity, against the criteria in the CLP Regulation. They considered all the scientific data in coming to their opinion, including both published scientific studies and industry sponsored scientific studies that RAC considered relevant. The Committee used a weight of evidence approach in its assessment, as required by the CLP Regulation.

RAC approached the assessment, as it has done in every other case, without any anticipation of the outcome for any of the hazard endpoints. RAC also does not set out to please any stakeholder organisation with its conclusions. There was no collective preconception of whether or not the substance was hazardous for any of the endpoints, let alone any collusion with industry, as alleged in the Global2000 report. The decision of RAC was reached by consensus, with individual
RAC members contributing their individual views on the subject as the discussion progressed.

Upon examination of all your arguments ECHA concludes that the dossier submitter (BAuA) and RAC have correctly followed all of the legal steps responsibly and with its usual scientific rigour during the process to harmonise the classification and labelling of glyphosate, respecting the CLP Regulation as well as all the OECD and ECHA’s own guidance.

Therefore, ECHA rejects all of the allegations made in the report. Furthermore, ECHA is concerned of an attempt to publicly malign the integrity of EU institutions mandated to ensure safe use of chemical substances in the EU. This is of particular concern, when the process actually provides the opportunity to submit any further data and to make any science-based observations during the process.

Finally, ECHA will at this critical decision-making stage not engage in any public discussion that could be perceived by your or other organisations as ECHA reopening its opinion. Therefore, we will consider your invitation for a public debate after the decision of the policy makers has taken place.

RAC approached the assessment without any anticipation of the outcome and adopted its Opinion on the classification of glyphosate following an independent assessment of all the scientific data.

RAC does not set out to please any stakeholder organisation with its conclusions. Any classification outcome was possible in this case. There was no collective preconception of whether or not the substance was hazardous for any of the endpoints, let alone any collusion with industry, as alleged in the Global2000 report. During the process individual RAC members formed their own views on the subject and at the end the decision of RAC was reached by consensus. RAC came to its conclusion on all the considered endpoints only after considering the overall toxicological profile based on the data in the original study reports.

RAC did not evade or hide any data and no studies were dismissed from the assessment – all important findings were discussed openly and objectively. The methodology has been appropriately applied in the CLH process as prescribed in the relevant

RAC has considered the evidence for classification from the animal studies, but has noted that the effects were observed inconsistently and generally only at the highest doses which in some cases were very high. Additional factors considered were the lack of evidence for mutagenicity and from epidemiology.

The Dossier Submitter as well as the experts of RAC considered all the relevant data in a weight of evidence determination conducted in accordance with the requirements in the CLP Regulation and applicable guidance, as it has done in every preceding case where the criteria cannot be applied directly to available identified information.

ECHA rejects all of the allegations made in the Global2000 report. Furthermore, ECHA is concerned of this attempt to publicly denigrate the integrity of EU institutions mandated to ensure safe use of chemical substances in the EU. It is of particular concern, when the process actually provides the opportunity to make all the points relevant to the case by legitimate means. 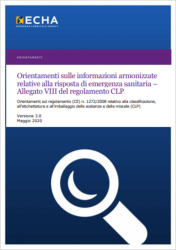 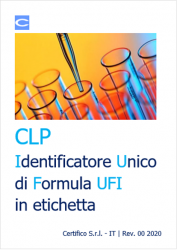 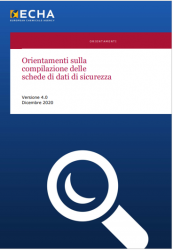