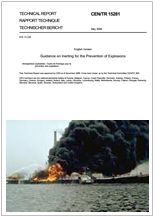 Guidance on Inerting for the Prevention of Explosions

Inerting is a measure to prevent explosions. By feeding inert gas into a system which is to be protected  against an explosion, the oxygen content is reduced below a certain concentration until no explosion can occur.

The addition of sufficient inert gas to make any mixture non-flammable when mixed with air (absolute inerting) is only required in rare occasions.

The requirements for absolute inerting will be discussed.

Inerting may also be used to influence the ignition and explosion characteristics of an explosive atmosphere.

The guidance given on inerting is also applicable to prevent an explosion in case of a fire.

The following cases are not covered by the guideline:

- admixture of an inert dust to a combustible dust;
- inerting of flammable atmospheres by wire mesh flame traps in open spaces of vessels and tanks;
- fire fighting;
- avoiding an explosive atmosphere by exceeding the upper explosion limit of a flammable substance.

Inerting which is sufficient to prevent an explosion is not a protective measure to prevent fires, self-ignition, exothermic reactions or a deflagration of dust layers and deposits.


This Technical Report (CEN/TR 15281:2006) has been prepared by Technical Committee CEN/TC 305 “Potentially explosive atmospheres - Explosion prevention and protection”, the secretariat of which is held by DIN.