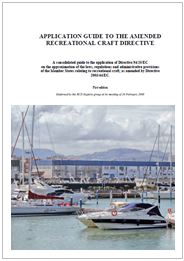 A consolidated guide to the application of Directive 94/25/EC on the approximation of the laws, regulations and administrative provisions of the Member States relating to recreational craft, as amended by Directive 2003/44/EC.

This guide is intended to be a reference document for all parties directly or indirectly involved with the recreational craft, personal watercraft, component and marine engine industry.

It should be read and used as an aid to the application of the provisions of Directive 94/25/EC as amended by Directive 2003/44/EC, which have entered into application as from 1 January 2005. It does not, however, substitute for these Directives.

It is the intention that it should explain and clarify certain important issues related to their application.

In addition these guidelines are intended to promote a common understanding on the conditions for the free movement in the EU/EEA internal market of the products covered by the amended Recreational Craft Directive, and have for this purpose been presented to Member States’ government experts, industry, notified bodies, users and other parties for comment.

The services of the Commission very much appreciate the assistance given by all stakeholders during the preparation of the consolidated edition of this guide.

The Guide is publicly available, but it is not binding in the same sense as legal acts adopted by the Community.

The legally binding provisions are those transposing the Directive and its amendments into the national legislation of the EU/EEA Member States. Directive 2003/44/EC and Directive 94/25/EC are "New Approach" Directives.

Additional guidance on the principles of the new approach can be found in the Guide to the implementation of Directives on the New Approach and the Global Approach. This guide has been published by the European Commission and can be downloaded from the Commission's website at the following URL:

It should be noted that the text of the Directive speaks of the “Community”, “EU” or “EEA” in the sense of trade area this should be read to mean both the European Union (EU) and the European Economic Area (EEA).