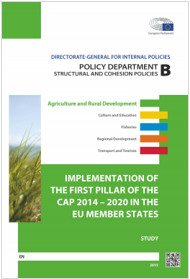 The 2014-2020 reform introduced many relevant changes in the tool box of the CAP.

Within Pillar I, one of the most relevant issues has been that of direct payments, which became more targeted at specific goals than they have been in the past.

Another key issue is the role of Member States in tailoring the new CAP according to the needs of their primary sector.

Consequently, what we face today in the EU28 is a multifaceted form of agricultural support under a common EU framework.